So I was off to the UK/Wiltshire to visit the in-laws and meet my new nephew, well I had heard there was good Roe buck in this area and decided to try find out about going hunting.
I posted a query on the fish-hunt forum and was directed to a UK site called thestalkingdirectory and not long after posting there I received a message from a forum member offering to take me hunting in exchange for information about hunting in NZ, awseome.

A few brief email exchanges and Rob has orginised a trip up to Scotland! Eight to nine hour drive each way from his place so a four day trip was planned.

After spending a great week in Snowdonia/Wales with the family, I got dropped off at Rob’s place, now of course we have not met each other in person so neither Rob nor I are really sure what to expect but it turned out we had a lot in common and I had a trip of a life-time with a great guy. 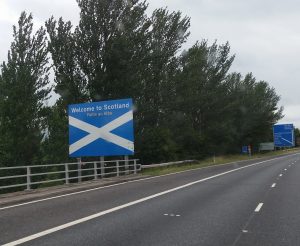 The drive up to Scotland in Robs campervan took us through some stunning scenery and up over the mountians. We arrive at the hunting grounds and park up the camper around 9pm still very light, whilst drinking a cuppa I see some movement up on the edge of a field and blow me down it is a Roe and a buck no less.
Rob quickly gets his rifle organised and we close the distance to 240 yards.

Setting up on a stone wall, I get behind an unfamiliar rifle, the stock is custom made by Rob and the grip is set up for him and I struggled to reach the trigger nicely but feel confident when I touch off the trigger only to see a complete miss. The buck bounces off back toward the pine forest, Rob is calm telling me to try again so I quickly re-align and touch of the trigger again, this time a satisfying whump reports back and the buck drops, but he gets back up and disappears into the pines. We make our way over and find some blood by the fence and scout around in the pines for fifteen minutes or so for no avail as we re-look where the buck disappeared Rob spots it tucked up under a dead pine branch just few yards away.

As he drags the buck out I get my first close up look at these neat little deer and blow me over it has a fantastic set of antlers, heavily pearled awesome looking. 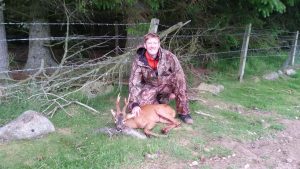 After taking some photos Rob suggests we carry on and pick the buck up on the way back. So we move on to the next area, a big valley and we scan and scan but nothing, move a bit further and we spot a fox, Rob tries to get a shot but the proverbial cunning fox eludes us.Time to head back and we are shocked to see the time is 11pm and still light enough to walk with no torch!

3am, the birds start to chirp and again it is light enough to see, we loop around the same valley and see a doe in the distance but leave her be once she tucks herself in behind a stone wall. As we walk back a young buck jumps out of some gorse and we bump him twice more without getting a shot. So back to the camper and drop the deer at the land owners chiller then head to town for some lunch and a siesta by the famous River Dee.

Evening time and we head up onto a hill covered in pine trees, on our way to the top we see a doe with twins and hear another barking at us from the gorse. Working our way down a lush valley with a bit of water running through it I spot a roe at about 80 yards and rob lets me take a shot. More confident with the rifle now I shoot off my knees and the deer goes down, a tasty looking button buck.

Morning again and we set off to the valley we looked at the day before, a couple hundred yards from the camper and I spot a doe feeding on broom flowers and Rob puts in a stalk where he gets to within 15 yards before she spooks, fantastic encounter. Again we scan the big valley but nothing shows. So Robs takes us to a field surrounded by a block of broom and pine trees. We quickly see a buck but he is feeding away from us so we close the distance and at 100 yards suddenly we notice another buck, then a doe and another doe. Rob indicates to the largest bodied buck and I sneak forward and place the rifle on it’s bi-pod, this time I try for a neck shot and down he goes another great buck and Rob says it is one of the biggest bodied Roe Bucks he has seen. 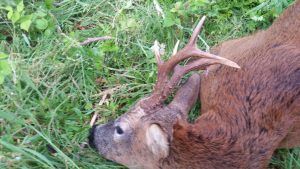