I have been out for a couple of reccon missions, putting a game came on a wallow close to where I stepped on a big Sika stag last roar while out with my bow (2014 Tia and I were pushing towards where we had heard a roar, sign everywhere, thick high Monawai/Pepperwood and Manuka, I was looking for a bit of open stuff to try a call from and just as I stepped into some Pepperwood Tia pushes hard on my leg and I see less than five yards away a great Sika stag leaping to his feet and bolting off into the scrub, doubt I would have even got a hip shot of with the rifle and no show with the bow). 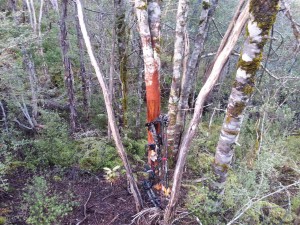 We also went for a loop around some ridges, checking for rubbing and stag sign, the wind was howling so I decided we should travel across the ridge bases with the wind up our ass then along the top on the way back. Not going very cautiously because the wind was behind, I bowl on through the first major windfall and a hind bolts out from the other side… Ten minutes later we are pushing through a Pepperwood gully and bump another hind. Bugger this I headed us up to the ridge top so we could go back with the wind in our faces, didn’t see any rubbing but saw fair bit of stag sign and Tia wanted to follow her nose into a couple of thick gulleys I have seen and heard stags before, but thought we leave them alone for a couple more weeks.

Photo of the day