In January my father past away. I had promised to take him out in the roar this year (he’d missed a beaut sika 2012 roar), so I asked my brother if he would like to come in his stead.

My brother like me had grown up learning to hunt rabbits and ducks from our dad, he shot a nice Thar when he was 19 but had not continued with hunting as he ended up living in cities here and in Oz. So we hoped to get him his first deer.

We planned to hunt wed/thu/fri…

The weather was quite inclement when we arrived in Turangi at mid day, which was our base for the trip.
After doing some catching up with friends and family we geared up and hit the hills.

It was drizzling on and off as we arrived at the spot I had decided to take us for the evening. Things were looking spot on, the wind was right but there was a tent at the car park and nobody around so I was trying to decide on a plan B when a vehicle arrived and we got to chat to the gentleman that owned the tent.
We discussed where he was going and asked if it was OK to head up a knob near by, he said no worries as he was setting up a fire and not going out that evening.

We quickly made our way up a ridge to the top of a knob where I had seen a good scrape a few weeks before.
Sure enough the scrape was there and freshened up. As I was setting up to roar and getting my bro into position we hear a hehaw a few hundred meters away in the scrub… yay a good sign.

The bush was dark and gloomy, but we were set in a good spot with about a 220 degree field of view with clear shooting from 15-30 meters. 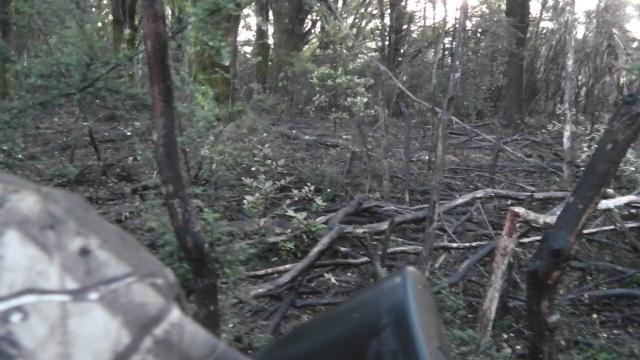 Six minutes later Tia is staring off a quarter to our left… I scan and see nothing…look to the right and notice my brother signaling me that he saw movement…I glance at Tia and she is locked on so I look along her line of site and see a set of antlers above a pepperwood.
Indicating to my brother but he can’t get a good bead on it so I give quiet “mmmeeee mmeeh” the stag bolts to our left and disapears off the side. 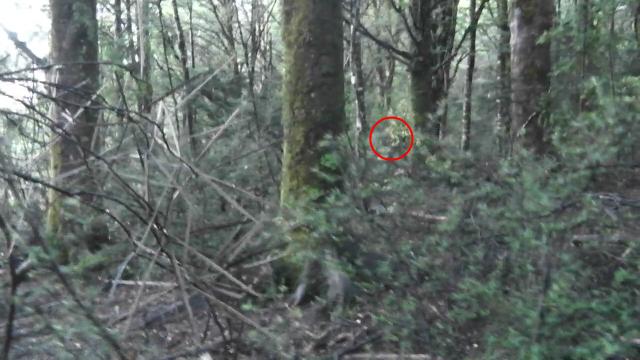 Stag standing off behind pepperwood.

Again “meh meeeeeeh meh meh” I give some mews… Tia re-locks on and I see the stag 20 yards away standing almost straight on in clear view but again my brother is at the wrong angle. So I get him to shuffle back into my position. 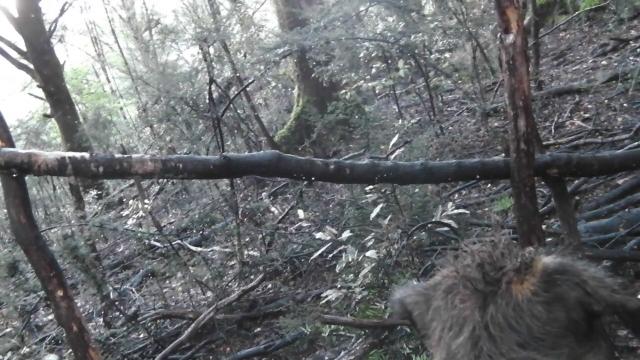 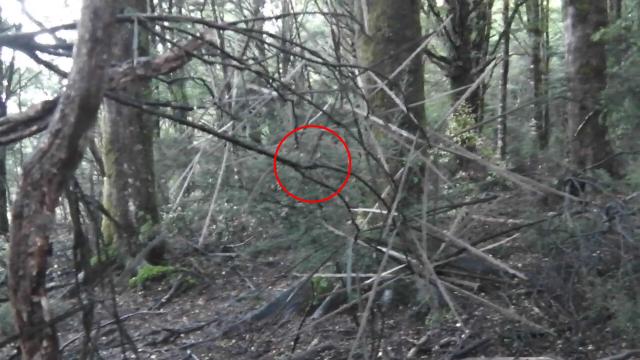 Stag in here but camera obscured by lance wood leaves, pair of antler tips in red circle if ya look hard.

Once back in my spot he has no problems picking out the stag in the scope….

Brother gets rifle on target.

Lines up the .338 federal just to the inside of its left shoulder (the stag was slightly left side on) squeeze of the trigger and the muffled crack. 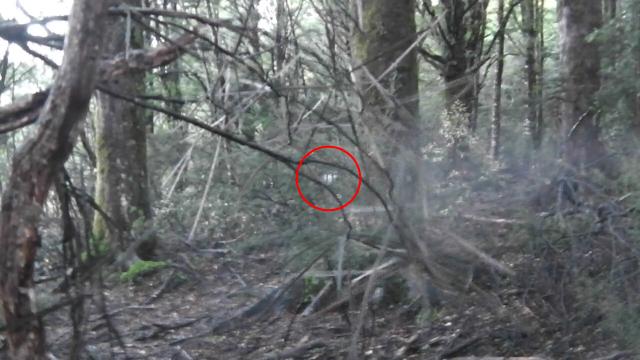 In a cloud of water spray I see the stag lurch then take off over the side into the manuka… a good solid hit… it sinks in that everything has come together.
Excitement levels are pretty high as we review what happened while waiting a few minutes before letting Tia do what she loves.

Sure enough she takes us straight to my brothers very first deer, a nice solid sika stag with very unusual antlers.

Again we review and I give my brother a quick hug…

A fitting hunt that our father would be proud of. 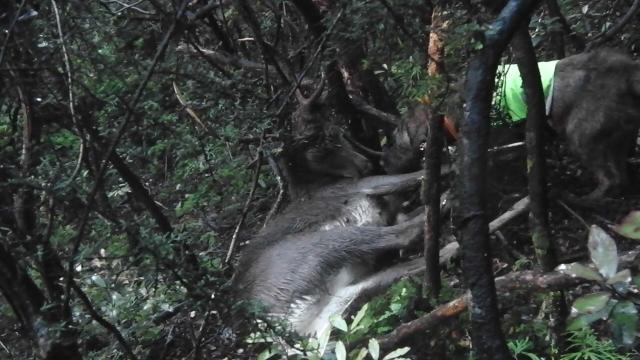 Tia tracks and leads us to stags resting place. 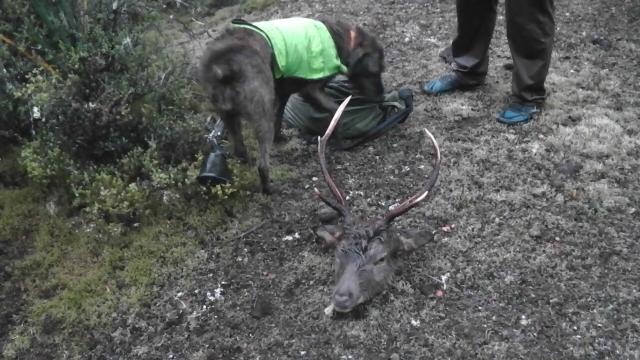 Almost back at car… Tia having a sniff at pikau full of meat. 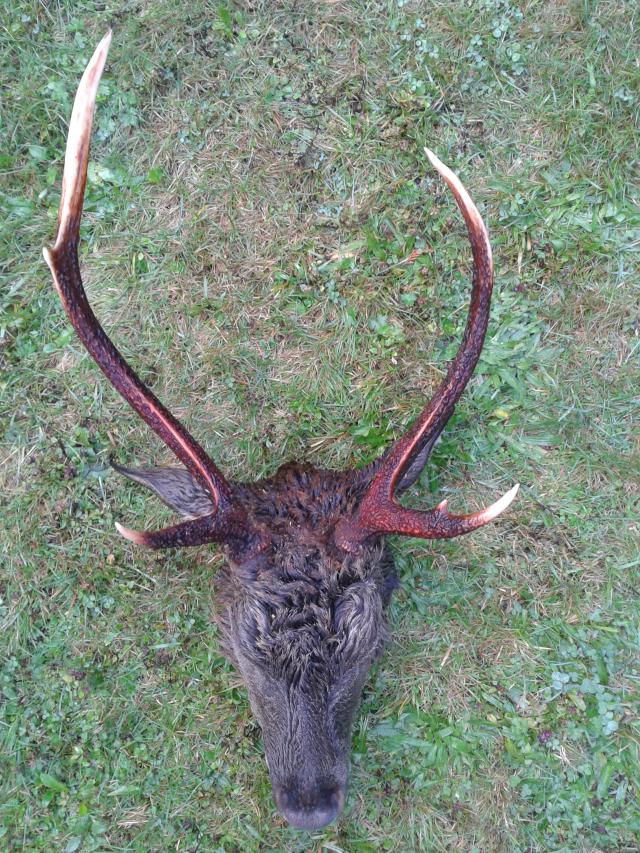 Unusual head… but has some very cool features. 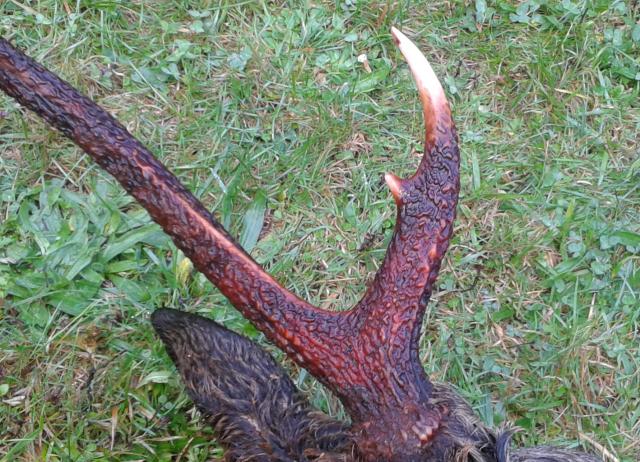 Extra little spur on brow time and check out the pearling.