Spent four days down my fav haunts, hunting in the scrub country, lots of action and a huge amount of fun for Tia and I. 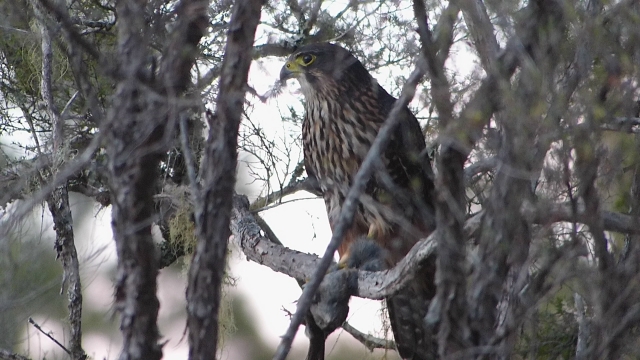 Karerea eating a blackbird, awesome bird to watch and not often you get a good close look.

Tuesday day 1:
Up at 5am to get into a good area by sunrise. We could here the odd hehaw going in various places and went to a nice ridge line for our first looksee.

As we got to the ridge top Tia started to wind nice and sure enough she leads us to a nice scrape, so I set up for a roar, give a couple of single calls and we are answered almost immediately by a return single call about 200m along the ridge. After waiting 15 minutes and not seeing or hearing the stag come in we closed the distance to 100m or so, set up again and let out another single call. Sure enough he answers straight away then a hybrid calls just a bit further in and instead of coming to me the sika stag heads off after the hybrid and I can hear them having a set-to and all kinds of clacking and crashing but the wind was wrong to head into them. In hind sight I could probably of charged in no worries the way they were carrying on.

Instead we carried on further along to the next main spur and find a real nice big scrape at the head, once again set myself up and single call, again answered straight away. The stag is below us 100m and I hear him coming in, Tia is looked on to him but he stops in the pepperwood and won’t come out and after 10 minutes he ghosts away and single calls again from where he started.
Tia and I creep down to within 50m and call again, one more he singles back but we hear him move away and he hehaws from a real thick patch, so I decide to push it and try walk in on him but as in 9 times out of 10 he wasn’t have a bar of it and moved off.

Time to head back for lunch and a cuppa to plan for the afternoon. By the time we head back out the wind was swirling badly so we didn’t try to get close to anything but heard a quite few hehaws and singles all over the place.

Decided during the night that we would hit the real scrub where we heard a lot of roaring the evening before.
After crawling on hands and knees on and off for an hour we had made our way to pretty close to where the first Sika stag was single calling (there was 4 other stags all single calling in close proximity one of which was a hybrid). I was about to start looking for a clearer space to roar from when Tia locks up and I hear clatter clack and a gargle (you don’t hear this noise very often, stags seem to do it when chasing a hind or another stag). 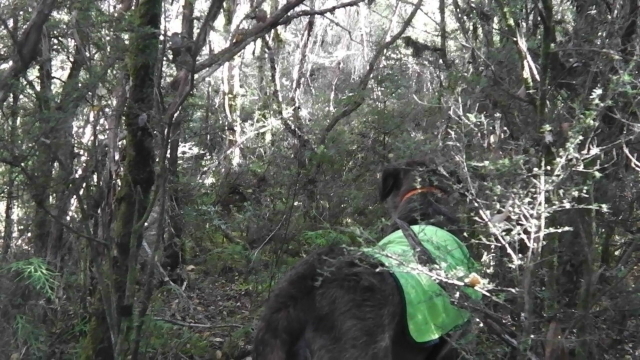 Tia’s head tracks from right to left and I can hear the animal getting closer, it then comes from left to right and I get a glimps at 10m yup a stag a split second latter it is 5m away and I take a shot as it hits an open spot.
He collapsed on the spot, the .338 fed doing it job to perfection. 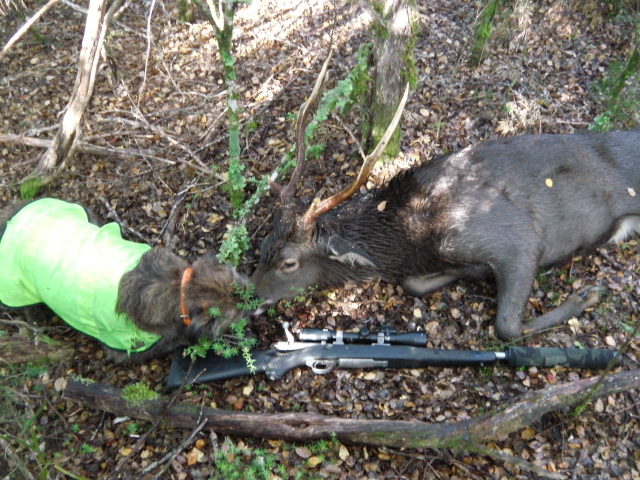 A nice young stag and in primo nick, the bullet had entered in front of the right shoulder, skimmed the spine and was resting under the skin at the back of his left ribs.(the dark spot to right of middle leaf in photo).
As I was cutting the skin to recover the projectile Tia spins around and I hear another clatter crack crunch… so I let out a meeyaaw and another stag comes charging in…this is all to much for Tia who decides she has a need to protect her kill and growls barks then charges at the stag before I can get her under control. As the stag crashes off Tia comes back and stands over the dead deer and I couldn’t help but have a bit of a laugh. 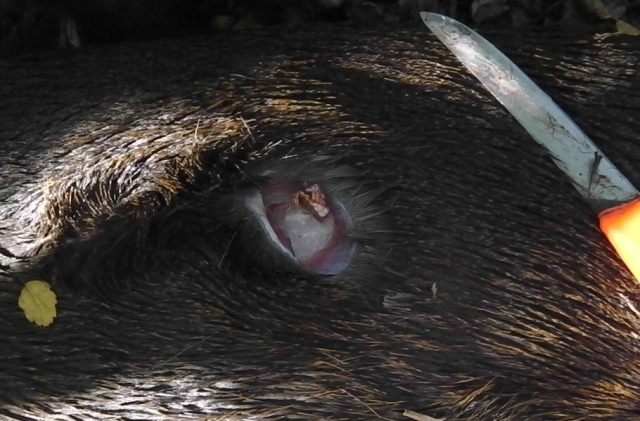 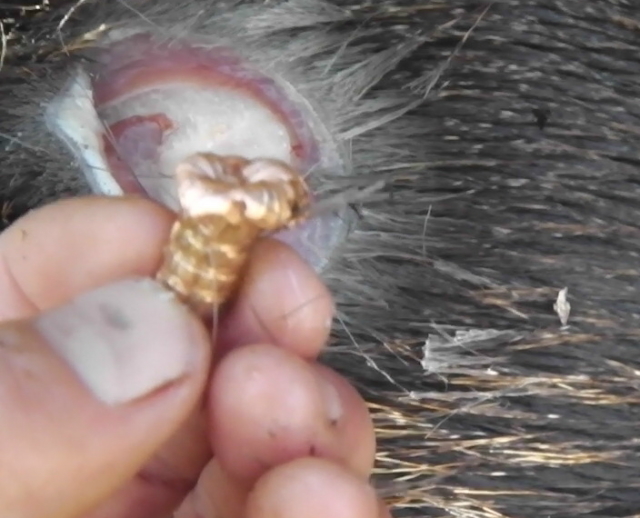 So I have quartered the stag and I am in the process of boning it out when the other stag comes back in thrashing the manuka as he comes, but stops short of a visual then runs off again in a huge commotion. Not a place I want to be carrying out 2 deer from anyway I am thinking.

All the other stags are still going off with single and hehaws like nothing is going to stop them.
Time to head/crawl back with all the meat and have well deserved cuppa and plan the afternoon hunt.

Afternoon and we are heading along a ridge top trying to decide whether to hit the beech or scrub Tia is winding nice up into the manuka and then a good hehaw sounds a couple hundred meters away in the scrub, wind is perfect so decision made easy off we go into the scrub.
We close the distance to about 50-60m, set up for a roar by placing the vid cam facing where I think the stag will come from, sit down amongst some small manuka and pepper wood and let out a couple of quick single calls.
3-4 minutes later Tia is locked on and her head is tracking the stag as it approaches, creeping around to our left trying to cut our wind. I see antlers above some pepper wood then he shows himself briefly in a gap about 20m away but stops with just his head and top half of his neck exposed, He is looking right at us… I line the scope up between his eyes but I don’t like front on shots and decide to wait and see what he does..seems like ages but eventually he turns his head side on and I squeeze off between his eye and ear. 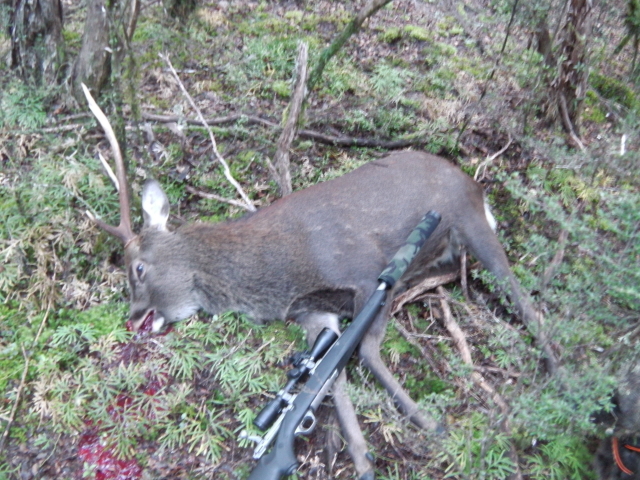 Needless to say he drops on the spot. A good solid stag, a bit bulkier than the one from the morning that was a youngin, his coronets are quite low and ears grey, a very mature stag, but not much on top. In great nick and another fine eater!
I decide to quarter him out and hang the meat in a manuka so I can get out before dark then I can bone out and recover it in the morning.

We got up a bit later and the sun had already risen, by the time I recover the meat and one it out it is almost 10am but I decide we might as well check a spot I know a big stag is holed up (big prints not sure of antlers as never seen him).
I set up and give a single call, I had hardly finished and he answers from 120-150m away, I wait 15 minutes with no sign of him so I single call again, this time he tries to cut me off mid call… sounds agro… but still he doesn’t show himself. I changed tack and try a meew…same result, we have a 40 minute long calling duel but he won’t come out and the wind was wrong to try get closer so I decided to back out and call it a day.

The stags were starting to go quiet in the afternoon and I couldn’t get any action but saw a hind and had a alarm call dual with her for 20 minutes as she popped in and out of sight trying to get a bead on me.

Day 4 Fri:
As I was heading to the Ruahine’s for the weekend that afternoon, I only had time for a quick morning hunt in the scrub but the wind was swirling badly and I just couldn’t get near anything without the wind mucking it up. Again the roaring had really tailed off and I only heard one stag going regular, I guess the first roar period was over.