Close Encounters of the Sika kind

Roar 2010:
4th April, weather was nice and fine.
We got to our spot about 7am and could hear a couple of Sika stags he-hawing but the wind was wrong to go after them, so I decided we would push our way through the scrub to a patch of beach 400 meters away up wind where I had found some pads the roar before but never had the wind right.

It took almost an hour to pick our way carefully through the manuka to the forest edge, Tia was winding on and off the whole way.
When we got to the Beech there was a scrape right where we came out and it had been tuned up earlier in the morning. I settled us down in a spot with a good view down a gut and side of the ridge and let out a couple of single calls.
Tia was really winding hard and I was anticipating a stag any second but after an hour and still no sign of an animal coming in so we moved dow the ridge 70 meters or so to the next pad just above a thick scrubby gut.

I was just about to let out a roar when Tia went tense and I heard movement in the thick stuff below, so I got Tia to sit and I did a couple of quiet mews and then took few steps to my right. No sooner had I stopped when a small stag came bursting out staring hard at Tia, the stag was less then 5 meters away. I took a snap shot at its shoulder and it staggered off down the gut into a small creek where it collapsed.

A nice young 4 point Sika stag, perfect eating size and in great condition seen as it was early in the roar. Certainly not the main stag though but a lot of fun all the same. Tia’s first close encounter with a live Sika! 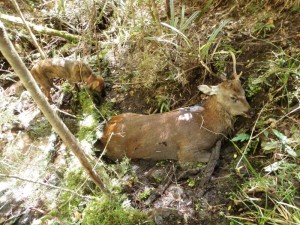